Indianapolis 500: A Century of Excitement 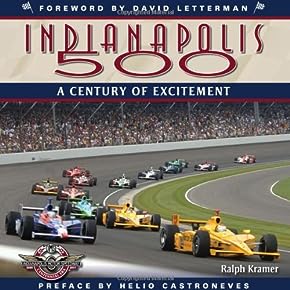 On Sunday, motorsport fans around the world will be tuning in to watch one of the sport’s most prestigious events, the Indianapolis 500. The following day will be the 100th anniversary of the 1911 Indianapolis 500, the first running of this famous race.

Marking the centenery, Ralph Kramer’s book Indianapolis 500: A Century of Excitement attempts to sum up 100 years of history in one book. A formidable task.

The results are mixed. It is difficult to imagine that such an accessible and full history of the Indianapolis 500 is available elsewhere. But at the same time, it’s hard to escape the feeling that detail has been sacrificed for the sake of brevity. This book is more towards the ‘coffee table’ end of the spectrum.

You progress through the book at a breakneck pace, as fast as Arie Luyendyk. Each decade has its own chapter. While the bitesize approach is certainly appreciated, I would have liked to see the book have an extra 100 or so pages in order to provide a more comprehensive history.

I also find that the text sometimes gets bogged down in technical aspects of the cars. While this is often interesting, some of it goes straight over my head, particularly in aspects of the earlier cars that bear little resemblance to anything found in a modern-day race car. This side of the book failed to get my pulse racing.

Exacerbating this, there is little about the racing itself in the earlier chapters covering the first few decades. Perhaps it is not well recorded in general, as this improves in the later chapters that cover more recent decades.

But the book comes alive with the wealth of photographs, cuttings and factual interludes. There are comfortably square inches dedicated to photographs than to text, giving this book the approachable feel of a scrapbook.

However, this does make reading the text itself rather more difficult than it needs to be. Sentences are cut midway, sometimes with multiple pages of photographs to wade through before you can read the end of the sentence. But if a picture paints 1,000 words, it is a small price to pay. The photographs of the cars, drivers, spectators and circuit do much more to convey the evolution of the race over the past 100 years than any text could.

Also scattered through the book are profiles of notable figures through the Indianapolis 500’s history. Again, these suffer from being rather too brief.

Following the chapter about the 2000s, the book is rounded off with a photograph of each and every Indy 500-winning car, with a short blurb explaining the subsequent fate of each car. This provides a neat at-a-glance overview of 100 years of motorsport heritage. That is the best way to approach this book — as an at-a-glance overview.

All-in-all, this book should be commended for attempting to cover 100 years of history in one book. It is a decent attempt, and what exists is quite enlightening. But it is impossible to do full justice to the full century. I was left wanting more depth.

Having said that, there is no denying that it is quite special to flick through this book and browse through the great photographs from the past. The breezy approach makes this a very accessible and relaxing read.