This article marks the return of Formula 1 to this website, as I have decided to (partially) close down vee8. For those of you who would rather not read the F1-related articles, you may like to subscribe to the F1-free RSS feed.

To break this process in gently, I have decided to make the first post a light-hearted look at what might happen in the 2010 Formula 1 season.

The season will be the most exciting ever, but the title of the DVD will make it sound like a wet Wednesday 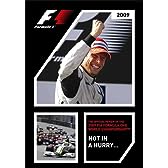 In 2006, Fernando Alonso took his second World Championship in scintillating style that went down to the wire. The title of the official Formula 1 season review DVD was “Once Again”, making it sound like your drunk uncle has just wet himself for the umpteenth time.

In 2007, after a tense season-long battle between McLaren team-mates Fernando Alonso and Lewis Hamilton, Kimi Räikkönen amazed the world by snatching the title from both of them in the final race of the season, overcoming a 17 point deficit with two races to go. The DVD was called “Kimi made it at last”, as though he had just come home late from a heavy night.

In 2008 Lewis Hamilton took the Championship in heart attack-inducing style on the last corner of the last lap of the last race. The DVD was called “Luck does not come into it”, which I still haven’t worked out the meaning of.

And the DVD really sold the 2009 season well by calling it “Not in a hurry…”, as if Jenson Button did not have a record-breaking winning streak at the start of the season.

Even if the Championship showdown is host to the first ever alien visit to this planet and is settled with a massive 200mph laser gun fight involving seventeen drivers from the planet Q’txxp’he, it wouldn’t surprise me if the DVD was given some madly dull title like, “I’d rather be watching paint dry”, “Isn’t Corrie on the other side?”, or “I’d stick with watching lawn bowls if I were you”.

2009 was the year of the Double Decker diffusers. The 2010 pre-season testing period has seen a similar curiosity surrounding the rear end of F1 cars, with teams being notably coy about showing off their behinds.

Although Bernie Ecclestone’s FOM is supposedly covering the world’s most technologically advanced sport, the television pictures will still resemble a smudgy YouTube video. Bernie Ecclestone will insist that there is no need for HD coverage because, “my IT guy told me he swears by his old CRT television”.

Despite the decision to give HD the cold shoulder, FOM will stick with their existing on-screen graphics, which are so small that they are actually bloody impossible to read on any 4:3 display. They may be declaring the start of World War III on those captions for all I know.

The title will come down to the wire in Abu Dhabi, with the main protagonists being McLaren team mates Hamilton and Button.

Towards the end of the race, John Button will think he has the upper hand by unleashing his killer move – undoing the last button on his shirt. Little will he anticipate that Anthony Hamilton will win the Championship by staring even more intensely.

Michael Schumacher will be the world’s most superstitious man

Following on from the revelation that Michael Schumacher has a mad superstition for odd numbers, the German will reveal a litany of hitherto unknown superstitions. Among these will be an insistence that his team mate runs with an inferior set-up because “it makes me feel a bit better about my car”.

He will also reveal that he has a special form of OCD that means he just has to brake-test any drivers that are behind him, and cannot stop himself from driving straight into anyone who has just overtaken him. He also has a strong superstition for getting to choose his own parking space, and will park his Mercedes car in Race Control, where he can literally control the race by tampering with the timing system.

No-one will think to point any of this out, because nothing is allowed to get in the way of Princess Michelle’s Fairy Tale Comeback.

Valencia’s tradition of having grid boys in addition to grid girls at the European Grand Prix will continue. Coincidentally, Flavio Briatore will make his F1 comeback at the very same race.

New teams will be unable to shake off speculation surrounding their ability to see out the season. While the early focus will be on USF1 and Campos, the spotlight will soon switch to Virgin Racing.

Suspicions will be raised mid-season when the Virgin team mysteriously re-brands with a green livery and makes a formal application to change its name to ‘Zavvi’. A few months later, the team will run out of money and close down, but not before a special fixtures and fittings sale where fans will have the opportunity to buy the screws that once held the car together.

The bearded beggar who appears at races is not homeless

Having made a tactical error by trying to get a drive at Mercedes only for some seven time World Champion or other to get in the way, Nick Heidfeld will begin the 2010 season without a job. He will resort to sleeping on the floor in the paddock and begging.

If you see a suspicious-looking bearded man in the paddock, it is probably Mr Heidfeld, the world’s greatest ever second place finisher. Although he might speak as though he is slightly drunk, he is not homeless and is perfectly harmless.