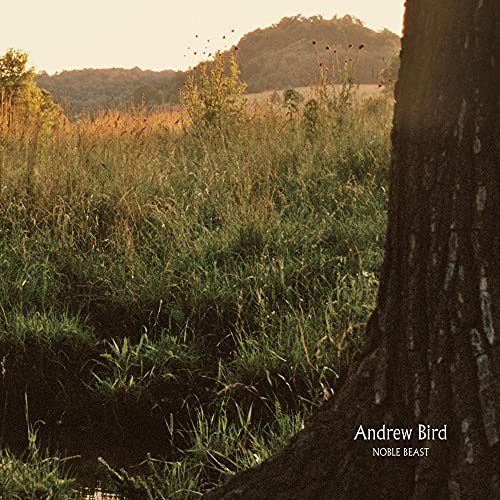 This is a purchase that I made experimentally. A few months ago I was accumulating a hefty order on Boomkat, and I was within touching distance of getting the free postage for spending £50 or more. But I couldn’t work out what to buy.

So I put it to Twitter, and Twitter made the decision for me. Why not, I thought? This way I would probably end up getting something that I wouldn’t normally consider. It’s good to broaden those horizons. Malc was pretty sceptical about it to me. He pointed out that it would have been cheaper for me to forego the free postage and not buy the extra CD.

But that wasn’t the point. Well, it sort of was. I can’t resist that free postage option. But anyway. What if the extra CD I bought actually ended up being good?

David Heggie was the first person on Twitter to respond with something that Boomkat sold. He suggested I should buy Noble Beast by Andrew Bird. I had heard of Andrew Bird, but I had no idea what sort of music he made, so this really was a leap into the dark for me.

It turns out to be a pretty good fit. I have tended to favour experimental and esoteric electronic music for the majority of my adult life. But in the absense of anything fresh or innovative-sounding in that arena, over the past couple of years I have found myself drifting towards more conventional acoustic, guitar-driven music. Pseudo-folksy stuff like Grizzly Bear and Fleet Foxes; bands I may well have shunned five years ago.

But it turns out to be not half bad. This style of music can easily fall into a steady template of blandness. Well, blandness to my ears at least, which usually need some kind of musical gimmickry to be satisfied. But Andrew Bird has enough idiosyncrasies to prevent it from being a problem in Noble Beast. For instance, his USP appears to be the fact that he is a virtuoso whistler.

My favourite track on the album is ‘Not a Robot, But a Ghost’. This video of him and his band performing it live demonstrates that he’s quite an impressive performer — not just as a singer, but as a whistler and a violinist too. Unfortunately, the live version cuts out the best bit of the song, which you can listen to below.

So the experiment which could have gone badly wrong (well, okay, it would only have left me in the possession of a CD that I vaguely disliked) has actually gone very well, despite Malc’s pooh-poohing of the scheme. It’s funny how things work sometimes.

In this age I could turn to Last.fm for recommendations based on a huge database of my listening habits for the past ten years. Or I could have tested out music on Spotify, or browsed around YouTube. Or any number of more sophisticated options. But the best unexpected new musical find I have made came from a random message on Twitter.

At least it’s something else I can tell people the next time someone is sceptical about Twitter. Thanks, Twitter! And thanks David Heggie!