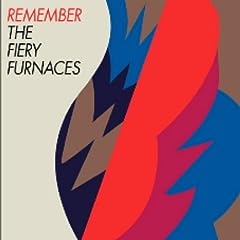 You wouldn’t expect The Fiery Furnaces to do anything in the conventional way. When their debut album, Gallowsbird’s Bark, was released in 2003, they were seen almost as being part of the same scene as The White Stripes. There was the bluesy-rock element to the thing, then the fact that both bands were a brother–sister partnership (though in the case of The White Stripes, it was actually a desperate publicity-seeking lie).

But come the release of their second album, Blueberry Boat, it was clearer that The Fiery Furnaces weren’t going to play it by the book. The stripped-back bluesy rock took a back seat and was supplanted by a kind of wonky prog, with antique synths, rattling pianos and a ceasless desire to keep the listener alert. Their following album, Rehearsing My Choir, was a concept album about their grandmother, who also provided lead vocals. Enough said.

Staggeringly prolific, the band now has five albums and an EP under its belt (plus a double solo album from Matthew Friedberger) after just a few short years. This year, for the first time since their debut, they have opted not to release a studio album.

Instead, they have released a double live album, Remember. But quite what you should expect from a live album from The Fiery Furnaces? Their live shows (although, regrettably, I’ve not been lucky enough to see them live yet) are famous for the radical reinventions of their songs, setting the words of one song to the melody of another, chopping their songs into little bits and creating one long medley, and so on. This promises the audience something a bit more than the sort of experience you might get by putting the album on a loud stereo and standing among a bunch of sweaty men who are intent on spilling beer all over you. You’ve got to admire a live act for putting a bit of effort into mixing things up a bit.

The only thing predictable about a Fiery Furnaces live album is that they would do something weird. Weird move number one was to eschew a standard tracklisting, instead listing six ‘suites’ and inviting you to guess the tracklisting for yourself and check a website later to see if you were right. I guess that at least replicates the live experience, where you are not sure what the setlist will have in store for you.

But that wasn’t all. When you start listening to the album, it is quickly clear that there is something not quite right. The first track proper, ‘Blueberry Boat’, contains a number of jarring switches in sound quality. It transpires that the “live album” that you hear on the CD has been spliced together from at least four different recordings, even to the point where songs are interrupted in their prime to switch rendition. Quality ranges from song to song and even within songs, from soundboard quality to bootleg without warning. Well, the liner notes do warn, “Please do not attempt to listen to all at once.”

Even though it takes a bit of time to get used to, it is not as annoying as you might think. What the purpose of this experiment was is not clear to me. But the decision to include a number of different recordings does at least mean that the album documents a full overview of the Fiery Furnaces live experience, with tracks spanning the band’s whole career.

As you might expect, not all of the live versions of the tracks sound as good as the studio-recorded album versions. But some of them are. Besides, what is really great about Remember is that it is not just another live album, where you could just add some canned crowd noise onto the studio album you already own. This is almost like hearing 52 brand new songs. Strangely familiar, yet different enough to provide a completely new experience.

Typically, despite the ostensibly painstakingly-created edits, the album keeps some of the band’s live guff-ups in tact. In fact, very near the start of the album we hear singer Eleanor Friedberger forgetting the lyrics and practically holding a committee meeting with her brother as they try to remember what comes next. It fits in with The Fiery Furnaces aesthetic — equal parts grand and shambolic.

Wonky prog, remember? Each of their albums sounds like an attempt to make Kid A with the cheapest, oldest equipment going. It’s all part of the band’s charm, and it’s good for that kind of attitude to continue even in the manner in which Remember has been edited.

So full marks to The Fiery Furnaces. Even though the strange editing has alientated some, I think the album is an excellent document of the band’s capabilities as a live act. It has provided me with a taste of some of their excellent live versions (I especially love ‘Single Again’ and ‘The Garfield El’). I am now eager to see them live whenever they next come near my neck of the woods.