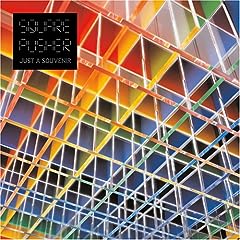 The premise of Just a Souvenir is most intriguing. “This album started as a daydream about watching a crazy, beautiful rock band play an ultra-gig,” says Tom Jenkinson on his website. He goes on to describe the mad japes that the band got up to in his daydream, setting out a vision of an eccentric, futuristic, science fiction-inspired rock band. Squarepusher then saw it as his duty to recreate his daydream in album form.

I can’t help but wonder if the story is just a bit of an excuse, explaining the slightly tongue-in-cheek nature of some of the tracks. Just a few minutes into the album the listener is asked to “re-spect the coat… HANGER” by a cod 1980s vocoderised singer (a giant coathanger being the fantasy band’s main prop). This is not a criticism. I don’t like music to take itself far too seriously, and Squarepusher remains on the playful side of things for most of this album which makes it a much more pleasurable listen.

The premise of the album also gives Squarepusher maximum opportunity to pursue his crazy sonic experiments. Then there is the fact that the band is apparently supposed to be a prog rock band. This mixture — a focus on technology and quasi-prog stylings — makes Just a Souvenir sound like the sort of album most bands in the 1980s would have dreamt of making. It’s the music that Tomorrow’s World promised.

But perhaps the most unique-sounding tracks are the ones which don’t have the pomp of the prog rock approach. The sonic experimentation is most evident on tracks like ‘Open Society’, ‘Fluxgate’ which presumably depict the classical guitar player who can travel backwards in time, taking the surrounding sounds with him to create “imploded sonic pin cushions”.

Stylistically these tracks are similar to some tracks that Squarepusher has been doing for a few years, beginning with ‘Itti-Fack’ from the Square Window EP. These tracks are brief and sound as though the audio has been recorded in another dimension. I can’t think of anyone else who makes music that sounds like this. It’s almost as though Squarepusher has created a new genre which, for the time being, is specifically his domain.

Elsewhere, Squarepusher’s sonic palette has been expanded with the surprising inclusion of some all-out rock songs. Although Tom Jenkinson is well-known for being a highly accomplished bass guitar player, his playing is typically of the jazz fusion variety, or perhaps set to some of his madcap Amen break-fuelled drill and bass, IDM or suchlike. I suppose since now that IDM is deeply unfashionable, it is sensible of him to move away from that sort of thing.

But it is nonetheless surprising that he has gone so far down the rock route. While tracks like ‘Delta-V’ are by no means like conventional rock music, the almost metal-like style of these tracks undoubtedly moves Squarepusher into brand new territory. Incidentally, what an enjoyable listen ‘Delta-V’ is.

What strikes one listening to this album is just how much it does sound like a full band. It has long been known that Tom Jenkinson is a truly multi-talented fellow, being a particularly accomplished bass guitar player while also impressing on guitars and drums, all while mixing it with electronic music’s oligarchy at Warp Records.

For his past few albums, Squarepusher has been increasing the eclecticism of his output, beginning with the amazing Ultravisitor (still my favourite Squarepusher album) which gave us a full taste of all of his talents from drum and bass stormers to gentile Spanish guitar performances, mixing studio-based and live performances to create a truly unique, odd-sounding album that can’t help but leave you impressed.

But in Just a Souvenir the tone doesn’t jump around uncomfortably as it sometimes does in Ultravisitor. Now all of Tom Jenkinson’s many talents are performing to such a high level, gelling so well that you would never guess that it wasn’t actually a band. What an achievement.