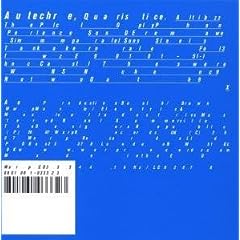 I have now had well over a month to digest the MP3s, and I have had the CD (and what a lovely object that is) for a week. High time for me to review Quaristice, Autechre’s first album for three years.

Pinksy encouraged me to write a track-by-track review, but I will not do that in case I make an arse of myself like that other guy. That, and because I can’t think of enough things to say about each track. And I know nothing about electronic music production so I really would be making an arse of myself.

The album starts off with a real surprise. ‘Altibzz’ is perhaps Autechre’s most luscious track since the days of Amber or Tri Repetae. It is not often that Autechre stray into making these beatless soundscapes any more, but it is a real treat when they do.

Paradoxically, for what is perhaps Autechre’s most immediately accessible track in a long time, for this very reason it was disorientating to listen to for the first time. It is an unsettling beginning to the album, because it leaves no preparation for what is to follow, namely the kind of brain-rattling beat bombardment associated with their post-LP5 work.

‘Altibzz’ is immediately followed by ‘The Plc’, a rather more dizzying track. It starts of with a kind of slippery-sounding beat, backed up with a dense synthy soundscape, like a darker ‘Altibzz’. The track progresses, in typical Autechre style, into something quite different yet the same. I love the vocals towards the end.

Autechre aficionados will immediately recognise some parts of Quaristice from the leaked recording of their 2005 gig in Glasgow as part of the Untilted tour. ‘IO’ brings us the first recognisable moment. However, I find this version disappointingly superficial compared to the live one. This had a lot more power live.

The other recognisable moment is ‘chenc9’. For me, this track succeeds much more on the album. It is a real high point towards the end of the album — upbeat, accessible and danceable, but as uncompromisingly intricate as any Autechre track.

However, my favourite track from the album is ‘Simmm’. This is not one of Autechre’s most intricate tracks. It’s rather immediate actually, with a funky melody and a groovy array of electronic percussive sounds. Another top track is ‘Perlence’. It sounds like ‘Popcorn’ by Hot Butter fucked with big time. Despite the ‘popcorn’ connotations in the sounds in this track, it’s a great listen. I also absolutely love ‘fwzE’. It reminds me of ‘The Trees’ but groovier.

A lot has been made about the immediacy of Quaristice in many of the reviews that I have read. I have to say that, in general, I did not feel this at all. I “got” Untilted straight away, and even Draft 7.30 was more immediate for me.

But listening to Quaristice gave me that stereotypical reaction to new Autechre music. I didn’t know what to think, I couldn’t possibly take in what I had listened to. I was quite confused really. I suppose I fell into the trap of wanting to hear Autechre’s last album rather than anything new. I was really looking forward to an Untilted II, which of course isn’t really the point of Autechre.

The initial alienation I felt was particularly exacerbated by the fact that, to me, Quaristice doesn’t feel much like an album. It skips from styles and moods with seemingly little thought to the overall flow of the album. With the additional fact that these tracks are much shorter than those on your standard Autechre album (20 tracks around 3–4 minutes long as opposed to 9 tracks around 7–8 minutes long), I was reminded most of Gescom’s MiniDisc.

Perhaps the fact that the tracks are relatively short by Autechre’s standards is one reason why some people found this album accessible. I just didn’t get that easy door in. After Untilted I smugly believed that I had learned to “read” Autechre as much as I needed to. Quaristice has certainly put me in my place!

It is interesting to point out here that in one of their recent interviews (in Wire magazine, not available online), Autechre have explained that the idea of Quaristice is to get to the meat of the track straight away, without any of the “language lessons” as they called the build-up of the track. I understand exactly what they mean, but for me the build-up was a lot of the fun of Autechre, and that has been taken away here.

If Quaristice has an overall sound, I would have to say that I think this is Autechre’s darkest album to date. One track in Untilted made me feel uneasy — ‘Pro Radii’. My first impression of Quaristice was as though I was listening to ‘Pro Radii’ for the first time, several times over.

A huge period of darkness comes towards the middle of the album. This period begins with ‘paralel Suns’, where, incidentally, the weaknesses of the MP3 format are shown up the most. This is followed by ‘Steels’, perhaps (along with ‘90101-5l-l’) the track that most reminds me of ‘Pro Radii’.

Next comes ‘Tankakern’, which at first I felt was reminiscent of ‘777’, one of my least favourite Autechre tracks. This, however, has been the typical Autechre grower. Now I think it approaches the brilliance of Confield, which I consider to be the pinnacle of electronic music. This track particularly reminds me of ‘Bine’ from that excellent album. Bonus marks go to ‘Tankakern’ for the inclusion of birdsong.

‘rale’ is where things start to become groovy again. A simple but addictively enjoyable beat accompanied by a rather immediate syncopated melody, though towards the end there are some rather unsettling sounds that remind me a bit of the creepy psuedo-subliminal messages in Boards of Canada’s Music Has the Right to Children.

We only truly emerge from the dark patch with ‘bnc Castl’. The track starts off ominously enough. But within seconds it becomes some madcap shiny, sparkly tune with tinsel flying all over the place. It sounds a bit like an ice cream van having a fight — a really rhythmic fight — with an ambulance.

It transpires that ‘bnc Castl’ is only a surreal interlude, as it is followed by ‘Theswere’. This sounds like it actually could be from a horror film soundtrack, albeit one where the monster is a draining sink. To be honest, this track is a bit cheesy by Autechre’s standards.

‘WNSN’ is not so intimidating, although it still has a very other-worldly quality to it. This track is very reminiscent of EP7-era material, particularly ‘Zeiss Contarex’.

Towards the end of the album we see a return to the more ambient sound found at the beginning. However, these closing two tracks do not succeed as much as ‘Altibzz’ for me. ‘Notwo’ would be quite pleasant, but the melody seems a bit ham-fisted and it’s not the most polished-sounding of tracks. Perhaps that was the intention, but I’m afraid I don’t like it.

The final track, ‘Outh9X’ is more like it, but not quite the triumphant climax it could have been. I know that Autechre are quite challenging, but even though initially many of their tracks sound very odd they tend to make most sense if you switch off your brain and just let it all wash over you; allow it to appeal on an innate, subconscious level.

This is not allowed to happen on ‘Outh9X’. I just don’t get the strange plinky-plonky melody that fades in and out towards the beginning and middle of this track. It seems completely out of place. It is quite off-putting and is enough to ruin the whole track for me.

Overall, I have to say that I find Quaristice to be quite an odd album. By any normal standards, it is brilliant. I don’t mean to come across as fanboyish (although I am a bit of an Autechre fanboy), but I can’t help thinking to myself, why is there no-one in the world who can hold a candle to Autechre? I mean really, why are they so good? There are plenty of imitators, and lots of people making music in the IDM tradition. But why are none of them anything like this good?

On the other hand, by Autechre’s standards, Quaristice is, for me, quite a weak album. It is probably their weakest since Chiastic Slide.

It is true, however, that Autechre material needs a very long time to be digested. The music grows on you and you are forever seeing the music in new and interesting lights. By the time Autechre’s tenth album comes out, I will be craving more material in the vein if Quaristice, just as I was hungry for more music in the style of Untilted.

Even so, I can’t help feeling that this is Autechre’s least ambitious offering for a very long time. For me, the interesting thing about Quaristice is that it covers a lot of old ground. There are elements here of almost all of their previous albums.

I should point out that I have read the interviews, and I am aware of the circumstances under which this album was recorded. Even so, on a purely sonic level — from what my ears feel — Quaristice is retreading a lot of old ground.

I suppose in a way it is a bit too simplistic to think of Autechre’s music as becoming increasingly complex over time. In their earliest albums, this is certainly true. But since LP5 or EP7 Autechre’s music, although changing in style and mood from album to album, has zipped around within the same boundaries as far as the intricacy of their music goes. Perhaps they always wanted to sound like this, but were limited by technology in the early 1990s.

Anyway, I do feel like a right Crispy Godber now because I have certainly analysed this too much. The best way to approach Autechre is not the chin-strokey way celebrating needless complexity. While it’s certainly interesting to consider, the real reason I like Autechre, as I suspect is the real reason why anyone likes any music — or anything, for that matter: instinct. As I said somewhere above, let it wash over you and it will make sense on an innate level anyway.

I will return to Quaristice soon with a review of the limited edition second CD, Quaristice (Versions).