Yesterday I promised that I would finally get round to posting my top three albums of 2007 today. I almost forgot about it because I was having so much fun writing my dissertation (true story). But a promise is a promise, so I am staying up extra late. I’m sure it won’t take long… 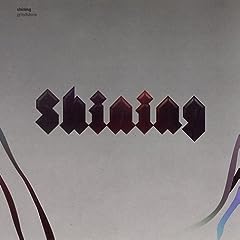 This must be the most overlooked album of the year. I should point out, in case you were confused, that I am talking about the Norwegian electro-jazz-prog metal band, not the Swedish suicide-themed death metal band.

I discovered Shining because some of their members used to be in Jaga Jazzist, another Norwegian band that I love. But while Jaga Jazzist are known for their quirky electo-jazz stylings, Shining have increasingly forged a path into the altogether darker territory of progressive metal.

But it’s not just that — it’s a cartoon version of metal. Jazz instruments play as big a role as guitars, and the whole lot is backed by whacked out singing and interspersed with ambient interludes. In short, expect the unexpected.

If it all sounds a little bit overwhelming, as though they have over-egged the pudding, do not fear. Although light moments are mixed with the darkness of metal, it is far from a scatter-gun approach. Everything is meticulously arranged. In fact, it is the multi-layered nature of the tracks and musicianship of the band members that impresses me the most about Grindstone.

I think it is an utter travesty that Shining are not more well-known.

Listen to the album in full at Last.fm

Video: ‘Winterreise’ — not an official video, but it has kind of been endorsed by the band.

So much has been made of this album, but not much of it has been about the music itself. I am a serial offender here as well.

I was disappointed at first. If you have been reading this blog for long, you will know that I quite like exploratory electronic music. I am much more of the Kid A stripe of Radiohead fan than The Bends kind. So I initially found In Rainbows to be a let down. It seemed too safe for a band as good as Radiohead.

It sounded little different to Hail to the Thief. It rather does suggest that Radiohead have found their equilibrium. The post-OK Computer explorations were just that: explorations. Now they have found a happy medium, and every future Radiohead album will pitch its flag in this middle ground.

But that isn’t necessarily a bad thing. It is strange to hear Radiohead sounding so comfortable — but over time I have come to see that as one of the greatest strengths of In Rainbows. Probably for the first time in several years — the first time ever? — Radiohead don’t sound tetchy or fed up or lost. They are at ease. They are just making great music.

In Rainbows makes Kid A sound immature and Hail to the Thief sound downright shambolic. Not that I am announcing that I now dislike Kid A — it is probably still my favourite album. But In Rainbows has a craftsmanship to it. It has been constructed, not thrown together. Kid A had ideas. In Rainbows has songs.

So the experimentation has gone. Or at least it is taking a back seat. So there is nothing aurally exciting like ‘Everything in its Right Place’ or ‘Pulk’. But there is now pure beauty: ‘Nude’, ‘Videotape’ and ‘Reckoner’ are now among my very favourite Radiohead songs.

What makes In Rainbows stand out as a great album is Phil Selway’s drumming. Time and again he has been the essential element in a Radiohead song, most notably in ‘Pyramid Song’. Today he is at the top of his game, providing unusual but immediate drumbeats. He’s obviously had to up his game since the rest of the band started using drum machines!

If I have a complaint, it is about ‘Arpeggi/Weird Fishes’. Not that it’s a bad song, but I much prefer the original ‘Arpeggi’. It doesn’t sound as powerful as the original live version, as the guitars make the arpeggios sound rather muddied.

And great albums don’t have songs as weak as ‘House of Cards’ and ‘Bodysnatchers’. The latter also has a line that has been stolen straight out of Pulp’s ‘The Fear’, right down to the way it’s sung. Not a high crime, but rather off-putting.

Discbox purchasers got a second CD, and amazingly the music is pretty much at the same high standard as on CD1. ‘Bangers + Mash’ in particular is a great, fun song. It should have been on CD1 in place of ‘Bodysnatchers’.

I have been going on all year about how great Battles are, and truth be told I don’t think there’s much else I can really say about Mirrored. Suffice it to say that it is great to hear someone genuinely pushing the boundaries and showing everyone what really can be done with technology when you put your mind to it.

My original review of Mirrored