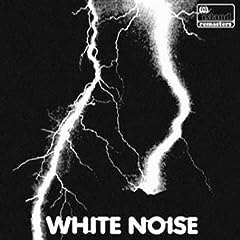 Despite my interest in electronic music, my collection — shamefully — doesn’t contain very much from before the 1990s. The only ones that I can think of from the top of my head are an album of music from the BBC Radiophonic Workshop, some Brian Eno and Steve Reich. A recent purchase makes me wonder if I should be buying more old electronic music.

White Noise was the idea of David Vorhaus, a classical double bassist with an interest in electronics. After attending a lecture, he approached members of the BBC Radiophonic Workshop — Delia Derbyshire (creator of the famous Doctor Who theme tune) and Brian Hodgson (who created the sounds of the Tardis and the Daleks). Together, they worked for a year on An Electric Storm, perhaps one of the most seminal electronic music albums there has ever been.

Incidentally, Delia Derbyshire was a genius in her own right. On an album showcasing Music from the BBC Radiophonic Workshop, Derbyshire’s work stands out. ‘Time to Go’ takes the famous pips of the Greenwich Time Signal and turns it into a cacophony of blips and bleeps before descending into farts, burps and squirts. I wonder if it inspired David Lowe?

‘Ziwzih Ziwzih OO-OO-OO’ is my favourite though. An utterly mad piece of music centring around a mad robotic chant. It sounds like it could have been created by a trippy early 1970s rock band, but it was made by a geek in a lab. There is a clip about this particular piece on this page about the BBC documentary ‘Alchemists of Sound’.

Back to An Electric Storm though. Listening to it, you can tell that it is not a recent work. It contains the sort of tricks used by the Radiophonic Workshop. But in a way this is what amazes me the most about it. This album is almost forty years old, yet it sounds more amazing than a great deal of the electronic music made today.

It’s all the more impressive when you consider the multiple hurdles the group had to clear. Having signed a contract with Island Records, they realised that they didn’t know how they were going to record the album. The first works were made by sneaking into the studios of the Radiophonic Workshop. But making an entire album this way would have been too risky. They had to build their own studio and using home-made equipment.

The album was made in an era before the widespread availability of synthesisers. Most of the noises were made by tape manipulation, a laborious task. The technique sounds a bit like an audio version of stop-motion animation. An original sound (from, for instance, Vorhaus’s bass) would have to be sped up or slowed down for each and every note. Even echo effects were achieved by rather crude means — playing two identical tapes out of phase.

A particularly ambitious song, ‘The Visitation’, took three months to make. Recording was taking so long that they faced legal action from Island and had to finish the album overnight. That the track in question — ‘Black Mass: An Electric Storm in Hell’ — doesn’t sound as though it was particularly rushed boggles my mind.

And what did White Noise receive for their toil? The album sold a paltry 200 copies in its first year, and the group made just £280. Luckily for us, and for electronic music as a whole, it gained traction in subsequent years and became an underground classic. This year it was remastered and re-released.

It is a genuinely pioneering record. Today an artist is labelled ‘experimental’ just for using a farty synth. But White Noise were actually pushing the boundaries and creating something truly amazing. It’s incredible to think that something so ambitious for its time should actually stand the test of time this well.

The album opens with the intriguing ‘Love Without Sound’. Vorhaus’s intention was to release this as a single to try and convert the population to electronic music. The result is a song that is equal parts accessible and impenetrable.

John Whitman’s vocals are other-worldly and detached. The music is a surreal, part-humorous, part-unsettling cacophony of clicks, clacks and warbles. This cleverly interacts with female laughs and moans. Despite the wide and unpredictable range of sounds, the resulting collage makes perfect sense, in its own surreal way. Think the “ho-ho, he-he, ha-ha” bit in ‘I Am the Walrus’, but lasting for an entire song.

The humour continues on the next track, ‘Here Come the Fleas’. While today’s electronic musicians are perceived as being serious, beard-stroking types, ‘Here Come the Fleas’ reminds you of the comedy potential of electronic music. The song lays into a lazy slob’s poor hygiene standards. The middle of the song is dominated by a brilliant section that would have made a cool guitar solo. It would have been so easy just to pick up a guitar and do it, but they had to go the hard way and make it with tapes, didn’t they?

That is on the “happy” side, known as ‘Phase-In’. People must have thought that this pioneering electronic music is a barrel of laughs. They were in for a shock when the turned the record over for the ‘Phase-Out’ side. The smiles and laughter are wiped away and the listener is treated to something that approaches the horror genre.

‘The Visitation’ — the track that took three months to make — is, for me, the highlight of the album. This stunning piece is about a couple of lovers who are torn apart by a motorcycle accident. As the girl screams, “please don’t go”, the motorcycle crashes. The spirit of the man who was killed tries to communicate with his weeping girlfriend, but is unable to.

It’s quite spine-chilling really. The music is genuinely haunting and really paints a picture of a dark, rainy night on a remote road where the motorcyclist is killed. It uses stereo to brilliant effect as well.

The singing and narration also creates the right mood. The spirit’s voice echoes spookily, while the singer is the coldly neutral bearer of bad news. When he sings, “Her lover’s not asleep, he’s DEEEAAAAD”, it makes the hairs on my neck stand up.

As I said, it could actually be a horror film. It would make a cracking piece of radio drama. This could be one of my favourite pieces of music. An eleven minute journey into a horrifying affair — it’s impossible not to feel sad listening to it.

Listening to An Electric Storm, there is no doubt that it is a unique product of 1969, the like of which could never be made again. Pitchfork’s review of the album says:

White Noise’s landmark 1969 album An Electric Storm might not the first thing most people think of when considering 1960s music, but there are few records anywhere tied more intrinsically to the moment of their creation. Recorded in the months immediately prior to the widespread availability of keyboard-based synthesizers, An Electric Storm might be one of the most painstakingly crafted electronic recordings of all time. Pieced together on improvised equipment via innumerable tape edits, this remarkable album is at once futuristic and unavoidably date-stamped, serving as a fascinating audio snapshot of a bygone era in sound generation and recording technology.

This was a time before the widespread use of synthesisers and computers, but at a time where there was a lot of enthusiasm and ambition for electronic music. I can’t help thinking that it’s just a little bit too easy to make electronic music today. It is impossible to imagine anyone except the bravest / maddest of souls dedicating a year of their lives laboriously fiddling about with tapes when they could just use their laptop to embark on a sonic adventure.

Given just how mind-bending this early electronic music is compared to a lot of today’s identikit techno, I can’t help but wonder if advances in technology have restricted musicians as much as liberated them.

If you are remotely interested in electronic music, I would recommend this almost as a must-buy. Not only is the music amazing, but it is also a real insight into the painstaking approaches of electronic musicians of the past (the sleeve notes are brilliantly educational in this regard). It really is true to say that they don’t make them like they used to.