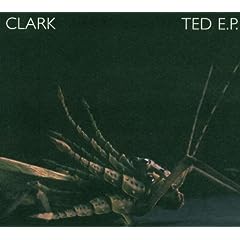 First CD review in a while. Hope you don’t mind. It is short though.

I won’t say much about this, but I will say that I am as disappointed in this EP as I was in his last album.

After ‘Ted’ itself we are presented with Bibio’s remix of ‘Ted’. I don’t think I’ve ever properly listened to any Bibio before. Going by this ‘remix’ (which to my untrained ears sounds more like a cover version than a remix), he’s not much cop. It’s just folksy guitars with effects to make it sound dated. In a similar vein to Boards of Canada’s The Campfire Headphase, which shouldn’t be too much of a shock since Bibio was apparently a big influence on BoC’s most boring album.

Beyond that we have ‘Bruise Animations’ which sounds like it’s had lots of parts recycled from one of the tracks from Body Riddle, but I can’t be bothered working out which.

‘Springtime Epiphany’ sounds like a slowed-down version of ‘Springtime Epigram’ from the album. But towards the end something new comes along — in the shape of synth-farts.

I was prepared to give the whole thing the benefit of the doubt until the final track, ‘Cremation Drones’ started. What a blatant rip-off of Boards of Canada this is! I really wish Chris Clark would get some ideas of his own because he is clearly talented. But he nicks his label mates’ ideas too much.

‘Tyre’ from Empty the Bones of You seemed to be influenced by the piano tracks from Aphex Twin’s DrukQs. Then, on Body Riddle, Clark copied Aphex Twin’s ‘Nannou’ almost wholesale in ‘Night Knuckles’. ‘Betty’ from Empty the Bones of You was also influenced by Autechre’s classic ‘VLetrmx’, and there’s not much attempt to hide it.

It honestly wouldn’t surprise me if he started twiddling around on a bass guitar for his next album.

What is strange is that Chris Clark’s most original album was also his first one, Clarence Park. He seems to be getting less adventurous as he goes on. I found Chris Clark so exciting six years ago. Now, it is sad to say, I almost dread new output of his.

Enjoy, if you can, the video to ‘Ted’. (Even this is just Chris Cunningham lite. Also, inexplicably, the track has had a minute chopped off for the video. Not enough footage?)