The world ended in 1966 for the Daily Express

I mentioned recently that I am a huge fan of the radio programme Up All Night. Every night on the programme a newspaper editor discusses what is going to be in the morning’s edition of his particular newspaper. Most of the editors do just that: explain what is going to be in the morning paper. But there is one person who consistently uses his spot on BBC radio as a political platform instead.

Without fail, every Tuesday morning, Hugh Whittow from the Daily Express sounds adamant that civilisation is on the brink of collapse. He always tries his very hardest to sound jaded and fed up with the world, although it doesn’t often sound that sincere. He just sounds like somebody trying very hard to roll their eyes as audibly as possible. Inevitably there will be a sentence somewhere in his diatribe that ends: “…and I’m afraid it’s just another example of political correctness gone mad.”

Whittow takes the concept to extremes. Sure, most of it is the sort of thing you would expect from the paranoid perspective of the Express / Mail axis of bitter middle-aged ladies. The Daily Express seems to permanently be on a “crusade” of some sort or another. You see, our traditional British values of decency, fair play and being slightly suspicious of foreigners are under threat from an army of politically correct Brussels bureaucrats who secretly tried to bump Diana off.

Indeed, traditional family values are being pissed on from a great height. The problem is, we can’t work out what height that is exactly because the EU says it’s got to be measured in metric, and we still don’t know what a metre is in inches.

I have images of a young Whittow rolling around in nappies in front of his television and literally turning inside out with rage when he first heard a weather forecaster give the temperature in Celsius instead of Fahrenheit. I imagine he still hasn’t quite recovered from the decimalisation of the pound sterling.

This week the world was officially going to end because the Royal Mail has “ditched” Christian symbols on its annual series of Christmas stamps. What an abomination! Those politically correct do-gooders are getting rid of the true meaning of Christmas and are replacing images of Jesus with secular images like reindeer — all to avoid offending Muslims!

Indeed, the 1996 Christmas stamps consist of religious imagery like three wise men gawping at a UFO and some shepherds standing next to a squint tree. The 1998 images are all of angels, which is kind of Christian (the insert is full of religious guff aswell). The 1999 stamps look kind of abstract, but the series is called “Christians’ Tale”, so I’m guessing they are Christian images.

But what is this I see on the 1997 stamps, entitled “Christmas Crackers”?

Is that a secular image of Father Christmas I see there? Maybe it’s Jesus dressed up as Santa Claus.

Infact, here is an identical story about the secularisation of Christmas stamps in The Daily Telegraph from over two years ago.

See, this isn’t a new story. Killer Whale claims, in the comments at The Daily Mail Watch, that up to and including 2003 the Royal Mail issued 21 sets of ‘Christian’ Christmas stamps and 16 with a more secular theme. 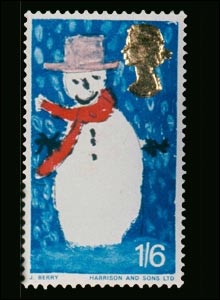 And what is this I see here? The first ever Christmas stamp to be issued back in 1966, according to BBC News. I suppose the good readers of the Daily Express thought that this was a depiction of the fourth, lesser-known wise man.

No, I think the Daily Express is just telling big lies to sell newspapers. Given that the first ever Christmas stamp contained a drawing of a snowman, that would make secular Christmas stamps more traditional than religious ones! Oh, and by this measure the world ended forty years ago.

No it didn’t. Instead we have to suffer the same old whining old bumwarts hijacking the traditional Pagan festival with their tedious religious propaganda. Give it a rest!